The Siege of Masada: Story & Symbolism of the Masada Fortress

Many visitors to the Dead Sea also like to tour its historic surroundings – there are quite a few interesting sites around this salty, beautiful lake. One of these sites is Masada:  the ruins of an ancient fortress scattered on a majestic cliff overlooking the Dead Sea and the Judean Desert. What is the story behind Masada and why is it so symbolic to the Jewish people? If you plan a visit there, make sure you read this article beforehand.

The siege of Masada was one of several historical events recorded by Roman-Jewish historian Flavius Josephus during the First Jewish-Roman War. The siege occurred between 73 and 74 CE, after the fall of Jerusalem.

The siege of Masada was a pivotal event in the First Jewish-Roman War as it brought an end to the first revolt by the Jewish people against the Roman Empire in Roman-controlled Judea.

At the start of the First Jewish-Roman War, a group of Jewish rebels called the Sicarii overtook the Roman garrison of Masada. Toward the end of the war, the Roman army laid siege to the fortification.

The siege lasted between four and seven months as the Romans needed to build a ramp to breach the isolated fortification. It marked the end of the Great Revolt, the first of three rebellions by the Jewish people against the Romans. Today, the siege is a symbol of heroism against oppression.

The background of the Masada siege

The site of the siege is the ancient Masada fortress. The fortress was built on the top of a rocky plateau on the eastern end of the Judaean Desert, located between Ein Gedi and Sodom.

The cliffs drop 450 meters before reaching the Dead Sea and many of the natural approaches are difficult to navigate. The features of the mesa-like plateau provided a strategic lookout for the region.

Recognizing the advantage of the location, Herod the Great built a fortress complex on the plateau. Herod was appointed the King of the Jews by the Roman Senate four years earlier.

In 37 BCE, Mark Antony commanded Herod to capture Jerusalem. After the fall of the city, Herod began construction of the fortress, which was completed in 31 BCE.

The Death of King Herod

Herod ruled until his death in 4 BCE. The king was mostly known as a tyrant, imposing heavy taxation on laborers. Many citizens became impoverished. After the king’s passing, the economy of Judea was in ruins and tensions were high. In 6 CE, Judea became a Roman province instead of a semi-independent vassal state. Several riots and a minor revolt occurred during this period.

The Roman Empire appointed procurators to rule Judea. At first, the procurators allowed the Jewish people to follow their own laws and customs. The people of Judea could rest on the Sabbath and were exempt from pagan rituals.

Stability in the region lasted for a couple of decades until around 37 CE. A combination of strict Roman law and the limitation of rights for the Jewish people in the empire led to hostilities. Between 64 and 66 CE, Gessius Florus, a Roman procurator, stole treasure from the Jewish Temple of Jerusalem and murdered Jewish people who opposed his actions.

The Jerusalem Riots of 66 CE

By 66 CE, tensions were starting to boil over in Judea. According to the historian Josephus, riots broke out in Jerusalem after a group of Greek citizens sacrificed birds in front of a synagogue. This led Jewish clerks to stop praying and giving sacrifice to the Roman Emperor.

It did not take long for random attacks and small riots to occur. To quell the rioting, Gessius Florus ordered Roman troops to breach the Jewish Temple. This led to more unrest and massive rioting throughout the city. Jewish citizens started mocking Florus on the streets. The Roman procurator reacted by ordering troops to raid Jerusalem and arrest various leaders. The arrested citizens were whipped and crucified.

After the outbreak of riots and violence, several Jewish factions began to emerge, including a group of Zealots known as the Sicarii. The Sicarii fled from Jerusalem and attacked the Roman garrison of Masada.

The Sicarii, led by Eleazer Ben Yair, executed the Romans and overtook the garrison. The rebels settled at Masada, using it as their base. According to Josephus, the Sicarii were an extremist branch of a larger group called the Zealots. The Zealots objected to Roman rule and used violence to obtain their goals.

Josephus writes that the Sicarii (Latin for “violent men” or “dagger men”) were more fanatical with their activities, going as far as murdering other Jews who they considered Roman collaborators.

In the Talmud, the Zealots are described as non-religious, meaning that they did not follow the opinions of the religious leaders at the time. Instead of seeking peace treaties, the Zealots were aggressive.

Revolts were occurring throughout Judaea, including Galilee. In 67 CE, Roman Emperor Nero sent General Vespasian to crush the uprising in Galilee. Within a year, the Roman legion stationed in Galilee had overwhelmed the Northern resistance.

John of Giscala, the leader of the Zealots in the north, escaped Galilee and fled to Jerusalem. During the revolt, the Zealots overtook Jerusalem from the Romans. In response, Vespasian sent his son Titus to retake the city. With the city cut off, Jerusalem descended into anarchy and civil war. The Zealots and Sicarii executed those who wanted to surrender to the Romans.

A short siege occurred at the Temple in Jerusalem with the leaders of the Judean provisional government attempting to oust the Zealots from the Temple. The Zealots received assistance from 20,000 Edomites to crush the forces of Ananus ben Ananus, the former High Priest of Israel. 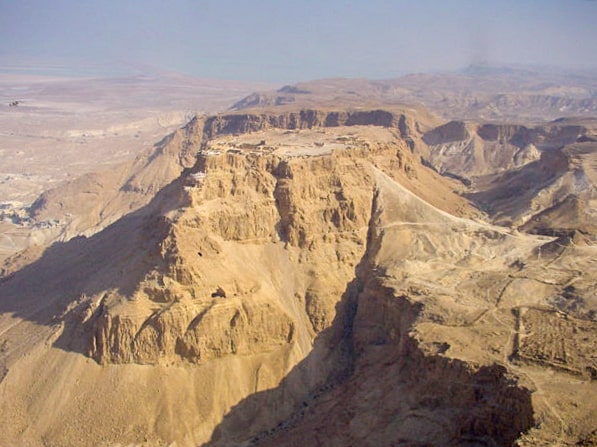 The Siege of Jerusalem

The Roman army, led by Titus, arrived outside of Jerusalem toward the start of 70 CE. Three days before Passover, the army began its siege of the city. The siege started in the west and lasted four months. After breaching the walls of the city, defenders were forced to retreat to other parts of the city, including the Temple.

Josephus, the Roman-Jewish historian, was sent by Titus to negotiate with the remaining Zealots and Sicarii in the Temple. This resulted in Josephus getting wounded with an arrow and the Zealots almost capturing Titus.

Along with fleeing to Masada, several rebel factions fled to Herodium and Machaerus. In the spring of 71 CE, Titus left for Rome and a new military governor was appointed. Lucilius Bassus was assigned the task of cleaning up the last remaining rebel strongholds.

Herodium, the same as Masada, contained a palace constructed during the reign of King Herod. It is also the only site named after Herod.

The palace was constructed on the top of an artificial hill and featured several towers and cisterns. Bassus and his Roman forces overtook the site in 71 CE before moving on to Machaerus.

Bassus marched across the Judaean Desert and captured the fortress of Machaerus, located on the shore of the Dead Sea. He then traveled into the Forest of Jardus to eliminate 3000 Judean rebels. Due to illness, Bassus was replaced by Lucius Flavius Silva, who then went on to lay siege to Masada.

The Roman Siege of Masada

In 72 CE, the Roman governor of Judaea ordered the siege of Masada to eliminate the last remnants of the Great Revolt. At the time, 960 rebels were living in the Masada fortifications.

Flavius Silva led 15,000 men and women to the area surrounding Masada. This group included about 8000 fighting men. The Roman legion surrounded the plateau and built many camps and a large circumvallation wall.

The wall and the camps kept the Sicarii trapped on the mountain. However, the Romans still did not have a method for breaching the fortification. The isolated Masada was difficult for anyone to reach, including a Roman legion under constant attack from defenders.

To reach the fortification, the Roman legion needed a ramp. The ramp took several months to complete as it required the Romans to move massive amounts of earth and stone.

The assault ramp was built on the western slope of the cliff of Masada. The ramp was reinforced with timber, providing the support needed to move a large ironclad siege tower with a battering ram.

The ramp was completed by the spring of 73 CE. After completing the construction of the ramp and siege tower, the Roman forces moved the tower into position and used the battering ram to breach the defences. Archaeological evidence of the ramp exists to this day. When the Romans finally breached the fortress, they discovered only a handful of survivors out of the 960 men and women believed to be inside Masada.

The trapped Zealots hoped to inspire the rest of the nation to join together in an insurrection against the Roman Empire. However, trapped on Masada, the Zealots realized that they had nowhere to run.

The Zealots decided that it was by the will of God that they were to die on the mountain. Instead of becoming slaves, they chose to die. As Judaism prohibits the act of suicide, the Zealots killed each other.

The account of what happened at Masada comes from two women and five children who survived the mass killing by hiding inside a cistern. According to Josephus and based on testimony from the last Masada survivors, Eleazar ben Yai’ir, the leader of the Zealots, commanded the remaining rebels to destroy everything in Masada except the foodstuffs. By leaving the food and storehouses, he wanted to show the Romans that they chose death over slavery.

The End of the First Jewish-Roman War

After the siege of Masada, the Romans had eliminated the last of the rebels and brought an end to the First Jewish-Roman War. With the revolt over, the Jewish people stayed resilient, continuing two more revolts before gaining independence. However, the first war had lasting repercussions.

The war scattered Jewish people across the Mediterranean with close to 100,000 people enslaved or captured. Josephus also claims that over a million people were killed during the siege of Jerusalem.

The massive number of deaths and the destruction of the Temple marked a turning point in the history of the Jewish people. Without the Temple, synagogues became central to Jewish life and rabbis soon replaced high priests as community leaders.

The Legacy of Masada

What happened at Masada remains a subject of debate. The only written record of the Masada story comes from the historian Josephus. Josephus writes that the Sicarii killed each other to avoid enslavement. However, some historians and archaeologists dispute his account.

It should be mentioned that Josephus was a former commander of Galilee. After being captured by the Romans at the Siege of Yodfat, he became a negotiator and attempted to negotiate with the Judeans while acting on Titus’s behalf.

After the siege, Josephus remained close friends with Titus and was even granted Roman citizenship by the future Emperor. Josephus never returned to Judea but continued to live in Rome under the patronage of the rulers who executed many of his people.

Some archaeologists dispute the evidence, claiming that the archaeological sites do not support the idea that the Masada rebels committed mass suicide or killings before the Romans breached the fortification. Additionally, Josephus provided inaccurate descriptions of Masada, such as the fact that the fortification had two palaces instead of one.

While some archaeologists and historians debate the history of the siege, the final act of the Zealots has become a symbol of heroic martyrdom. The legacy of Masada is the heroism to stand up against tyranny.

The history of Masada is an important story and visitors have the chance to see the site when visiting the Dead Sea region. In fact, it is now one of the most popular attractions in Israel, with millions of people visiting Masada annually.