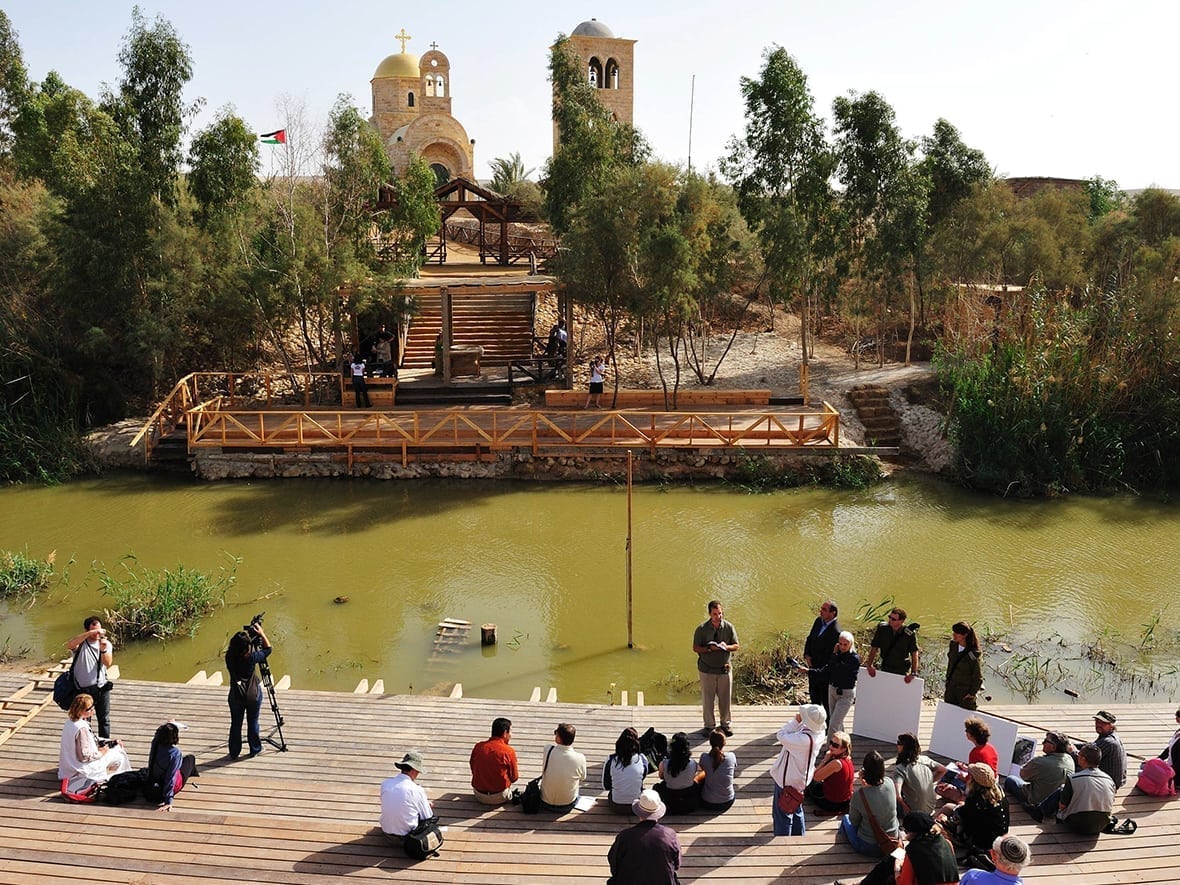 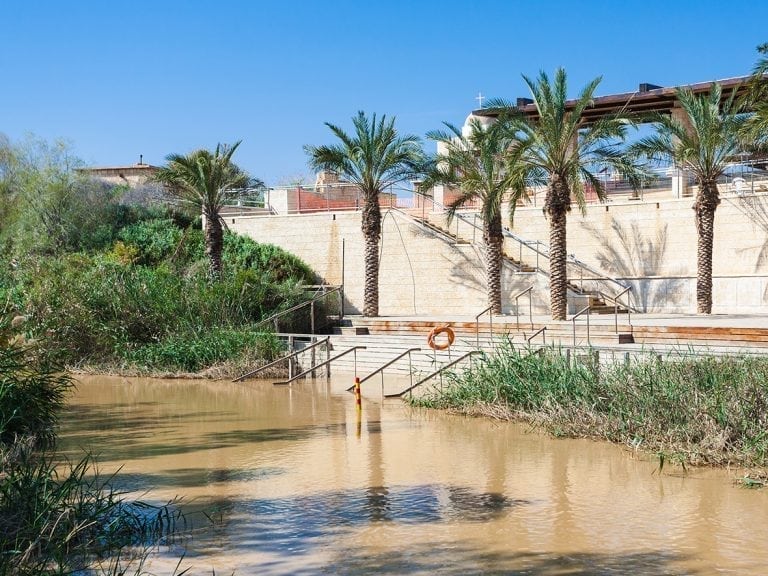 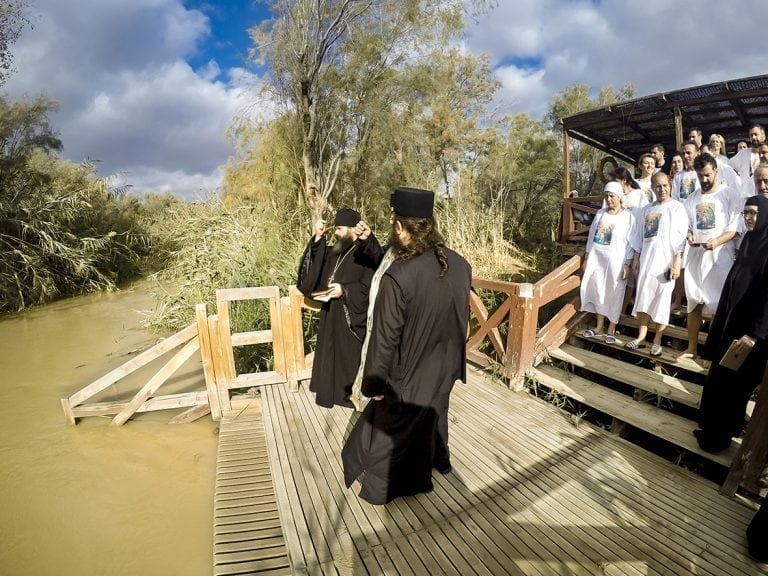 The Baptism of Jesus of Nazareth is regarded as being his spiritual birth. For Christian believers, this baptismal site is considered to be the third in importance after the Church of Nativity and the Church of the Holy Sepulcher.

Biblical significance of the location

According to tradition, this spot at the Jordan River is both where the Israelites, led by Joshua son of Nun, crossed the river to enter the Promised Land following the Exodus from Egypt; and where approximately 300 years later, the Prophet Elijah crossed the river in the opposite direction, to be taken into heaven by ‘fiery chariots’, witnessed by his disciple Elisha.

Furthermore, this is also believed to be the place where Jesus was baptized by John the Baptist. Researchers cannot identify the exact location for these events beyond the reference that they occurred in the proximity of Jericho, however, since the Dead Sea was a natural barrier between the land of Moab across the Jordan, when approaching from the south, the first option of crossing by land into the Promised Land was from where the Jordan River enters the Dead Sea, just to the north of its northern shoreline.

From a theological point of view on the baptism of Christ was ‘prefigured’ by the entrance of the Israelites to the Holy Land.

After 40 years in the desert, the crossing of the river is described in the Book of Joshua 3:11-17 as having taken place in the dry river bed, after The God of Israel held back the river’s flow for the convenience of the 12 tribes once the Ark of the Covenant and 12 men had entered the water. This event is considered as being a spiritual baptism for the Children of Israel in the holy water, which symbolizes the transformation from being nomads into sovereigns of their own Land.

Similarly, the Baptism of Jesus, described in The Gospel of Mark 1:9-11, is seen as a transformation, from which point Jesus ceases his former simple life in Nazareth and begins His Public Ministry (Mark 1:14-15), in which he performs miracles and gathers recognition, but first, we are told in the Gospel of Mark 1:12-13 that Jesus too, while fasting, is ‘tested’ by Satan for 40 days and nights immediately following the Baptism.

Location of the Jesus baptism site

The site itself is located approximately 8km north from the intersection of Route No. 90 and Route No. 1, 15 km away from the northern shore of the Dead Sea.

The Jordan River is the actual border between the State of Israel and The Kingdom of Jordan. Between 1967 and 1994, the site was almost impossible to visit, locked in an effective ‘no-man’s land’ between barbed wire fences and surrounded by mine-fields. Following the Peace Agreements between the neighboring countries in 1994 the border was defined along former cease-fire lines and access made possible.
Nevertheless, for several years following 1994, entrance was only possible with a military escort and involving complicated logistics and procedures. Since 2011 new regulations and work on the site has enabled easy and free access to the site, which is now managed by the Israel National Parks Authority.

This site suffers from a questionable quality of water since as a result of the Israel-Jordan Peace Agreement, no water flows regularly from the Sea of Galilee to the Jordan River, nor from the Jordan’s other powerful tributary the Yarmukh. As such, the water present is mainly agricultural run-off from the Jordan Valley, together with local sewage. Due to seasonal changes for the dry and rainy seasons, it is advisable to gather updated information about the quality of the water before entering it.

Along the earlier centuries of the Current Era, many churches and monasteries were constructed within the vicinity of the site, beginning in the Byzantine Period. Later, when times became harsh for the Christian community, the monasteries served as a refuge and place of protection for pilgrims, but as the pilgrims grew fewer, especially following the Moslem re-conquest from the Crusaders in the 12th Century, most were abandoned. Later in the Ottoman Period, from the 17th century onwards, custodianship was restored to the Greek Orthodox Church for its buildings, but most others still remain abandoned.

Since 2011 two new outdoor chapels have been constructed, mainly to serve the Eastern Orthodox celebrations at the site, but which are also used by Christian visitors of all denominations.

The mass-gatherings for prayer and the celebration of the Feast of Epiphany by Western Churches, which follow the Gregorian calendar, take place at the site on January 6th.

The much larger celebrations of the same event for the Eastern Orthodox Churches called the ‘Theophany’, which follow the Julian calendar, take place on the 19th of January.

Further celebrations of Baptisms also take place at the site for all Churches as part of the Easter weekend in April.
Site Information

The site has prayer chapels, benches for worshippers, toilets, changing rooms and showers, and a visitor’s center.