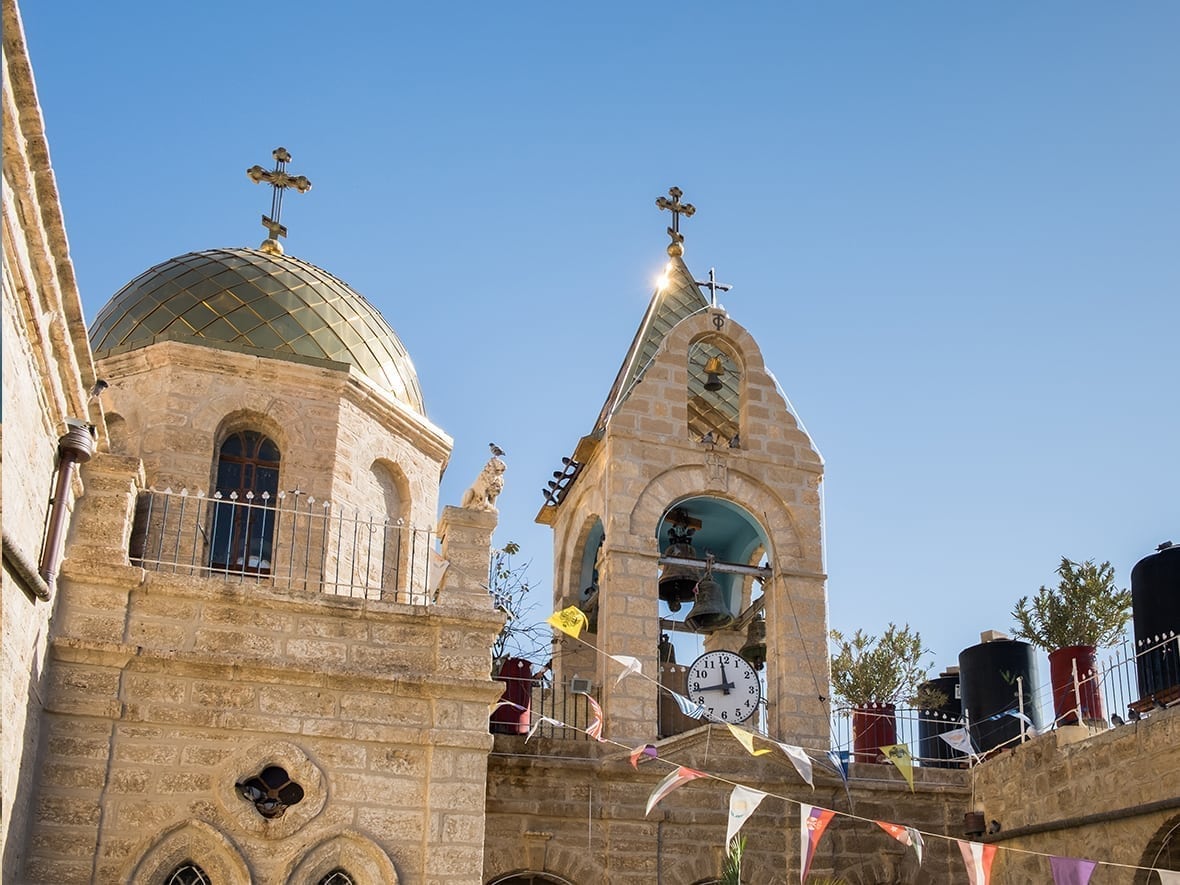 St. Gerasimos is one of the oldest monasteries in the world. The site is better known as Deir Hidgla, an Arabic name derived from the Hebrew ‘Beyt Choglah’ (‘Choglah’ is Hebrew for the Quail – the Alectoris bird). The Hebrew name is first mentioned in the Hebrew Scriptures (Joshua 15:5) among the list of the border towns for the inheritance of the Tribe of Judah.

It’s important to point out that the early movement to the monasticism of hermit monks was born here in the Judean Desert, during the 3rd and 4th centuries of the Current Era. Until the establishment of this Convent, the early monasteries were either a ‘Connuvium’, in which the friars shared a central accommodation, or ‘Laura’, meaning a path – where each monk would dwell in a separate cave, all meeting together just once a week for prayer and to celebrate the Eucharist. This monastery was established by St. Gerasimos, a charismatic monk, the founder and patron of the Jordan riverside monasteries, in 455CE (AD). This innovative monastery was a school for new friars, who would come here to become accustomed to the hermit life. The newcomers dwelt in the common facility whilst the veterans had their own chambers, all under firm restrictions.

The ‘Regula’ (monastic discipline) included 5 days of total silent solitude in the chamber and a severe diet of dates, bread, and water, with no use of a lantern or any means of heating. Only at weekends would the friars enjoy a cooked meal with a little wine. The weekend meetings included prayers and a communal recital from Psalms. The friars could possess no property and were expected to keep total control over bodily temptations. During their solitary stay in the cells, the friars would employ themselves by weaving ropes and baskets from palm leaves, or copying Holy Scriptures.

The Construction of St Gerasimos’ Monastery

The monastery itself was constructed like a fortress, with an inner courtyard. Its location in the middle of the plain supplied no natural protection.
In the center of the ‘Reliquiarium’ (relics’ room) – a glass cabinet can be seen, with bones and skulls of chosen monks – a reminder that life is temporary and that according to the church the afterlife is far more important than this one. Every monk who passes away is buried in a nearby cave. After the passage of one year, once the flesh is decomposed, the bones are transferred to this room.
The upper basilica is a typical Greek Orthodox church with an iconostasis (frontal row of icons in the eastern apse) that separates between the knave and the altar.
Due to its proximity to the axis of the Great Rift Valley geological fault, the building suffered earthquake damage in 2004. During the renovation, an impressive mosaic floor was discovered. The icons in the mosaic depict basic Biblical stories from the creation of the world.

The lower chapel is decorated with a large picture of St. Gerasimos together with a lion, a camel, and a donkey. These are invariably connected with the iconic depiction of the saint. According to the legend, as St. Gerasimos walked one day to the river he saw a lion in agony due to a thorn stuck in his paw. Everyone else ran away, but the saint courageously came near and plucked out the thorn. In return, the lion became a loyal friend and learned to get along with the rest of the animals that accompanied the saint. One day, however, while the saint was away, lacking for food, the lion devoured the donkey. On St. Gerasimos’ return, he was furious with the lion’s disobedience and the lion was punished – to be enslaved and replace the donkey. When the saint finally passed away, the devoted lion died on his grave.
The renovations at the site throughout the last 20 years have made it a pleasant site for visitors.